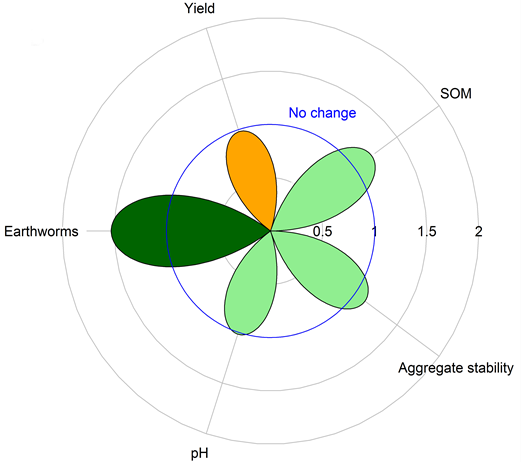 Soil is increasingly recognized as a non-renewable resource on a human life scale because, once degraded it’s regeneration is an extremely slow process (Camarsa et al., 2014; Lal, 2015). Given the importance of soils for crop and livestock production as well as for providing wider ecosystem services for local and global societies, maintaining the soil in good condition is of vital importance. To manage the use of agricultural soils well, decision-makers need science-based, easy-to-apply and cost-effective tools to assess changes in soil quality and function.

The concept of soil quality includes assessment of soil properties and processes as they relate to the ability of soil to function effectively as a component of a healthy ecosystem (»Soil quality - a critical review). Specific functions and subsequent values provided by ecosystems are variable and rely on numerous soil physical, chemical, and biological properties and processes, which can differ across spatial and temporal scales (Doran, 2002; Nannipieri et al., 2003; van Diepeningen et al., 2006; Spiegel et al, 2015). As such, selection of a standard set of specific properties as indicators of soil quality can be complex and varies among agricultural systems and management purposes. According to Islam and Weil (2000), soil quality is best assessed by soil properties that are neither so stable as to be insensitive to management, nor so easily changed as to give little indication of long-term alterations.

Understanding interacting effects of agricultural management practices on soil quality indicators (SQI) is essential for the development of the soil quality app that is iSQAPER's main product (»SQAPP the soil quality assessment app). Such effects can be best analysed from data of agricultural long-term experiments (LTE), where soils are experimentally manipulated to identify the key drivers of soil change. These trials allow to study changes over time of soil properties under various types of treatment (e.g. plough/no-tillage) and their respective intensities (e.g. ploughing frequency).

In this section of iSQAPERiS we analyse and summarise the data of a large range of LTEs. Our hypothesis was that sufficient data for promising soil quality indicators can be extracted in order to show trends over time as a basis for further, generic decision-making on recommended agricultural practices.

We have considered organic matter addition, no-tillage, crop rotation and organic agriculture as “promising practices”; no organic matter input, conventional tillage, monoculture and conventional farming were taken as the respective references or “standard practice” (baseline). Relative effects were analysed through indicator response ratio (RR) under each paired practice. For this we considered data of 30 long-term experiments collected from 13 iSQAPER case study sites in Europe and China. These were complemented with data from 42 long-term experiments across China and 402 observations of long-term trials published in the literature. Out of these, we only considered experiments covering at least five years.
»Soil quality indicators: data collection and analysis

The results show that OM addition favourably affected all the indicators under consideration. The most favourable effect was reported on earthworm numbers, followed by yield, SOM content and soil aggregate stability. For pH, effects depended on soil type; OM input favourably affected the pH of acidic soils, whereas no clear trend was observed under NT. NT generally led to increased aggregate stability and greater SOM content in upper soil horizons. However, the magnitude of the relative effects varied, e.g. with soil texture. No-tillage practices enhanced earthworm populations, but not where herbicides or pesticides were applied to combat weeds and pests. Overall, in this review, yield slightly decreased under NT. Crop rotation had a positive effect on SOM content and yield; rotation with ley very positively influenced earthworms’ numbers. Overall, crop rotation had little impact on soil pH and aggregate stability - depending on the type of intercrop; alternatively, rotation of arable crops only resulted in adverse effects. A clear positive trend was observed for earthworm abundance under organic agriculture. Further, organic agriculture generally resulted in increased aggregate stability and greater SOM content. Overall, no clear trend was found for pH; a decrease in yield was observed under organic agriculture in this review.
»Effects of management practices on soil quality indicators: results

We conclude that earthworm numbers appear to be the most sensitive indicator for the four paired management practices and positively affected by all the promising practices in comparison to the corresponding standard practices. LTEs are an invaluable source of information and at the basis of understanding the mechanisms and magnitude of soil change. Given the ever increasing pressures on agricultural land, every effort possible should be undertaken to maintain, enhance, and connect existing LTEs, and where possible invest to extend their network.
»Conclusions and recommendations