Here we present the responses to the questionnaire and summarize specific comments and feedback. Further analysis of the data to see if there were any differences between the responses of men and women is given in »Gender disaggregated feedback results.

1.1 How relevant are the physical soil properties proposed by SQAPP?

Results show that the stakeholders considered soil texture and PAWSC to be very relevant (42) compared to the other properties, while coarse fragments are considered relevant in comparison to BD, depth to bedrock, soil texture, and PAWSC. When considering both “very relevant” and “relevant” responses, all properties are considered important in the local context. However, 13 stakeholders consider that depth to bedrock is irrelevant in comparison to the other properties (Fig. 2A). The responses given by the farmers follow same patterns (Fig. 2B).

1.2 How relevant are the chemical soil properties proposed by SQAPP? 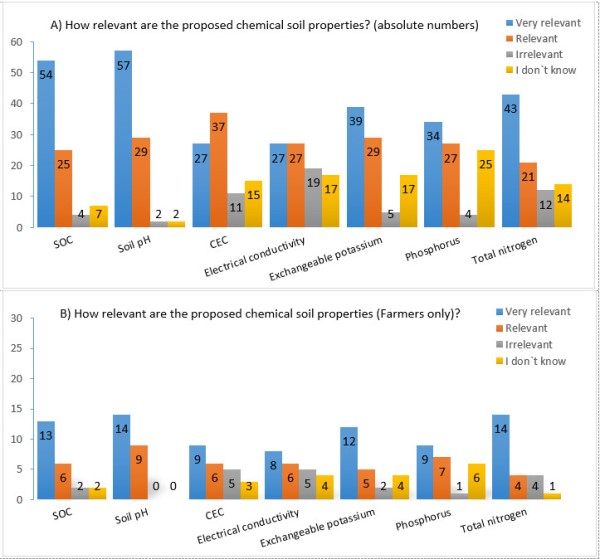 1.3 How relevant are the biological soil properties proposed by SQAPP?

About 50 of the 89 stakeholders considered both biological properties as very relevant or relevant, while others consider them irrelevant (12 stakeholders for estimated soil microbial abundance, and 11 for the macrofauna groups). About 30 stakeholders did not understand their relevance (Fig. 4A). The responses given by the farmers' group followed the same patterns (Fig. 4B).

1.4 Did you understand the meaning of the probability density functions? Did the full range of values make sense to you within the local context?

Thirty-nine of the 90 stakeholders said they understood the meaning of the probability density functions (PDFs) that SQAPP provides (Fig. 5A) and 49 agreed on the plausibility of the full range of values defining it (Fig. 5C). However, they were either partially or not understood by 51 of the respondents (Fig. 5A and 5C). The responses given by the farmer group are comparable to the ones of all stakeholders (Fig. 5B and 5D). 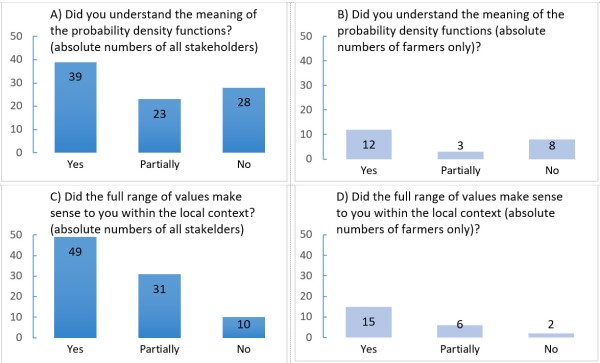 1.5 Are there other important properties you commonly use to assess soil quality that are not provided in SQAPP?

From the 35 responses to this question we highlight the following (in decreasing order of priority):

1.6 How user friendly is the soil property chapter (easy to use, convenient, practical)?

When we looked at the suggestions, comments and feedback on the soil property chapter, the most prominent issues are summarized as follows (in decreasing order of priority):

The responses to these questions show that SOM decline is the most relevant soil threat followed by soil nutrient depletion, soil compaction, and soil acidification while soil salinization and soil erosion by water were considered as irrelevant. The majority of the respondents had no data to enter into SQAPP regarding soil salinization, soil erosion by water and wind, or soil acidification (Fig. 7A).

For the question “are the threshold values meaningful in the local context? If no, specify”, 19 respondents provided comments showing the following facts in decreasing order of priority:

2.2 How user friendly is the soil threat chapter (easy to use, convenient, practical)? How do you consider the "potential for soil property improvement (%)"?

In answer to these questions, the respondents consider soil threat chapter good and satisfactory in terms of the user friendly format (Fig. 8A). For the second question about the potential for soil properties improvement, the majority of the respondents consider it “about right” (Fig. 8C). When considering only the responses of the farmers, a similar trend is observed for both questions (Fig. 8B and D). 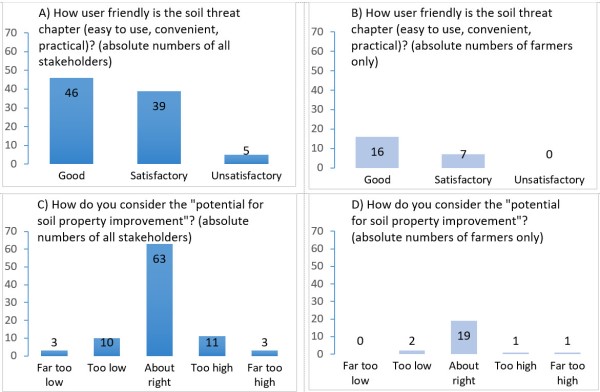 Additional suggestions and feedback concerning soil threat chapter can be summarized as follows in decreasing order of priority:

2.3 Do you agree with the value when considering the soil quality of the plot in relation to the range of conditions for the same soil type in the region? Are you satisfied with the proposed "soil parameters needing attention"?

A sizeable group of the respondents agreed with the value regarding soil quality (32 of 90), and 47 respondents partially agreed (Fig. 9A). Concerning the proposed “soil parameters needing attention”, the majority of the respondents agreed while 11 and 26 of 90 neither agree with their plausibility nor their ranking/priority, respectively (Fig. 9B). Additional comments and issues raised (21 points of feedback) concerning these issues raised by the two above questions are summarized below in decreasing order of priority:

The results concerning the above questions show that the overwhelming majority (87 respondents among 90) found that “the overall threat level” bar (Low – High) are comprehensible. 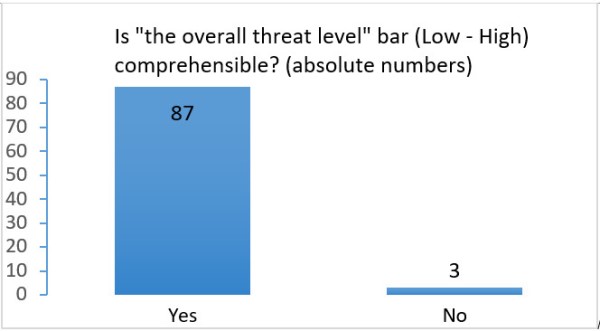 2.5 Does the overall position corresponds to your own estimate of overall soil threat level? Are you satisfied with the listed "soil threats needing attention"?

Concerning the first question, the majority of the respondents (75 of 90) found that the overall position of the soil threat level correspond only partially to their own estimate (Fig. 11A). In contrast, the majority of them, 77 and 68, are satisfied with the listed “soil threats needing attention” in terms of plausibility and ranking/priority, respectively (Fig. 11C). The responses of the farmers are comparable to the ones of all stakeholders for both questions (Fig. 11B and 11D). These results follow a similar pattern as those soil parameters needing attention values given in Fig. 9B. 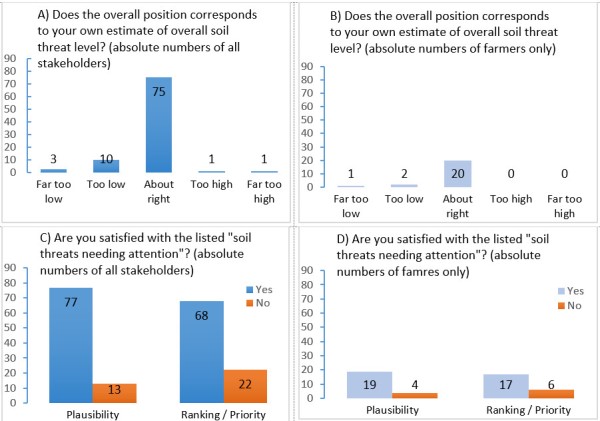 These results can be explained by the fact that only a few AMPs were considered appropriate and interesting to try in the locations where SQAPP was being tested (Fig. 13A). It is suggested that recommendations should be restricted to the most important and innovative AMPs that can be implemented in any one location, instead of listing many practices that are out of context. These recommendations are also valid for the farmer group (Fig. 13 B).

Figure 13 shows the 49 responses to the 3 questions below.

The answers to these questions suggest that at least three three AMPs have already been implemented by the stakeholders or are considered as appropriate for implementation in their areas.

3.2 What type of additional information would you require?

Three main additional information types were requested by the respondents and are listed in order of decreasing priority (Fig. 14):

The majority of the respondents (42 of 55) were satisfied with the suitability of the AMPs recommended by SQAPP, but only 28 among them were satisfied with the level of innovation. Seventeen of 55 respondents were not satisfied (Fig. 15A). These results are also confirmed by the responses to the second question concerning the novelty of the recommended AMPs: 29 of the 55 respondents considered that the AMPs were not new, 17 ones attest only partially to their novelty, and only 9 thought that the recommended AMPs were new (Fig. 15C). Comparable responses were given by the farmers concerning the first question (Fig. 15B) while for second question, the majority of the farmers consider the recommended practices only partially new for them (Fig. 15D). 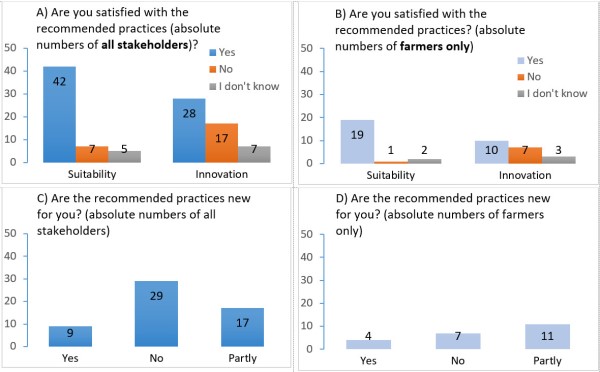 Additional comments (13) were summarized as follows:

3.4 Specify in what format?

The responses to this question suggest using an overview webpage (23 of 46) and videos to support the recommendations (Fig. 16A). Comparable results were obtained from the farmers (10 of 23 responses for overview web pages and 7 for videos) (Fig. 16B). One important comment, not reported previously, is the necessity of providing documentation on how to implement the measures in practice and give examples of good practices in in other locations with similar soil properties.

3.5 Does SQAPP fulfil your expectations? Do you see a potential use of SQAPP for the stakeholder group you belong to? 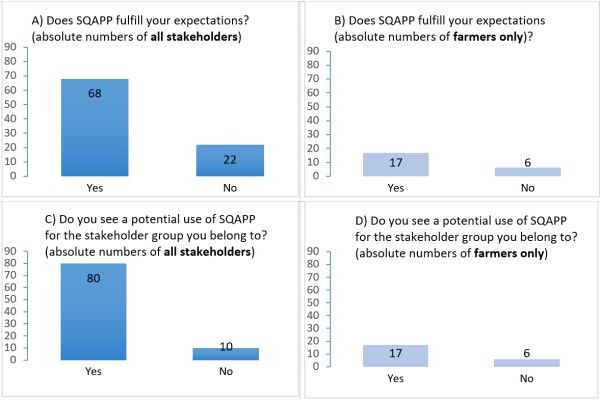 Additional comments from the respondents included:

i. SQAPP is very useful for many reasons:

ii. SQAPP has some limitations and needs improvements:

3.6 What adaptations should be made to SQAPP to make it more useful for you?

Finally, the respondents were asked to suggest improvements that should be made to SQAPP. The following are highlighted in decreasing order of priority:

The complete set of comments is contained in the Annexes of the report.